‘Triple Whammy’ moved to a new home in Mexico. 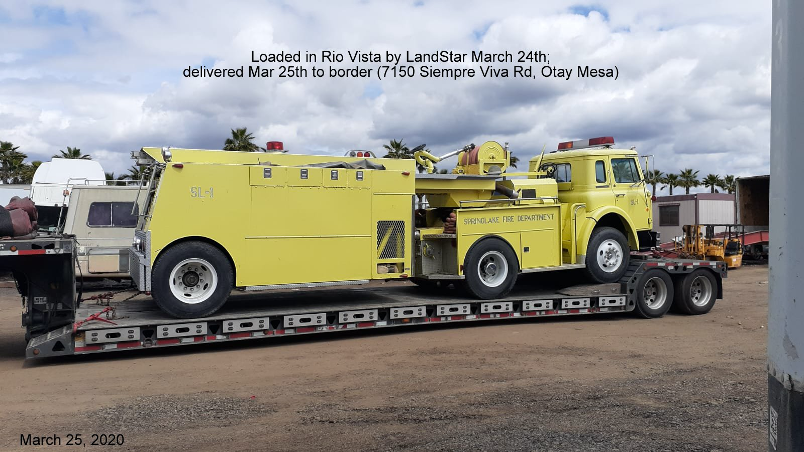 The Volunteer Fire Support Branch in Woodland California was looking for a new home for a 1974 fire engine that had life left in it but was excess to their needs. Dubbed the “Triple Whammy” due to the number of hoses it can put on a fire, it was still in great shape but finding a new home for the fire engine was not as simple as it sounds. The process took years and the help of 5 Rotary Clubs across California and 2 in Mexico.

In 2017, the president of the Rotary Club of Orinda Weylin Eng, invited member Jose Avelar to accompany him to Woodland to talk to the Fire Support Branch personnel and check the engine out. They agreed to accept the engine and send it to Tala, Jalisco, Mexico.

The Rotary Club of Tala was excited about it, but months later declined, as their roads were not suitable.  The town of El Grullo found out about the truck and contacted Orinda Rotary to confirm that it was still available. Orinda Rotary asked the Rotary Club of Guadalajara to act as an intermediary with El Grullo, with member Heinz Ehrsam then agreeing to coordinate the Mexico side of the transfer.

It was decided that each side of the border would fund their respective cost to trailer transport the fire engine. El Grullo immediately started fundraising for the transportation costs. Orinda and the Rotary Club of Woodland agreed to split the cost for the U.S. side, and Woodland Sunrise Rotary agreed to help out.  Jose Avelar, and Gary Wegener of Woodland Rotary, were coordinating the US side of the transfer.

Meanwhile, the Fire Support Branch was finishing the restoration of the engine, which had been garaged but out of service for decades.

The focus turned toward researching the trailer transport and the export/import/customs process at the border, amid stories of donated fire engines being delayed indefinitely by customs.

Enter the Rio Vista Rotary, who was refining the fire engine border crossing process with a US fire engine they were transferring to Mulege, in Baja California. Their President, Lee Williams and member Jay Huyssoon, assisted by Tahoe City Rotarian Kathy Van Diest completed that transfer and happily shared their lessons learned with Gary and Jose.

The Triple Whammy was given its final pumps and plumbing checks by the Support Branch, and then left Woodland mid-March for a vehicle check (with labor donated) at Williams Mobile Service in Rio Vista before heading south.

The Triple Whammy was trailered behind a semi for the trip to the border at Otay Mesa, arriving March 25. It was cloistered in secure storage for four months as El Grullo officials worked through the customs process to reduce the import duty, and customs brokers worked through the border paperwork, all hampered by coronavirus restrictions.

All was resolved July 24 and the Triple Whammy, accompanied by the El Grullo fire chief Walter Sanchez, was trailered again for the last half of the trip, finally arriving in its new home with the Bomberos El Grullo on July 27.

Gary Wegener of the Rotary Club of Woodland remarked that this experience showcased the power of Rotary and the joy of cross border projects.  The project involved 7   Rotary clubs, with everyone bringing something different to the party.  As noted in a recent Rotarian magazine ‘we bring people together, we solve problems, and we do the hard work’. 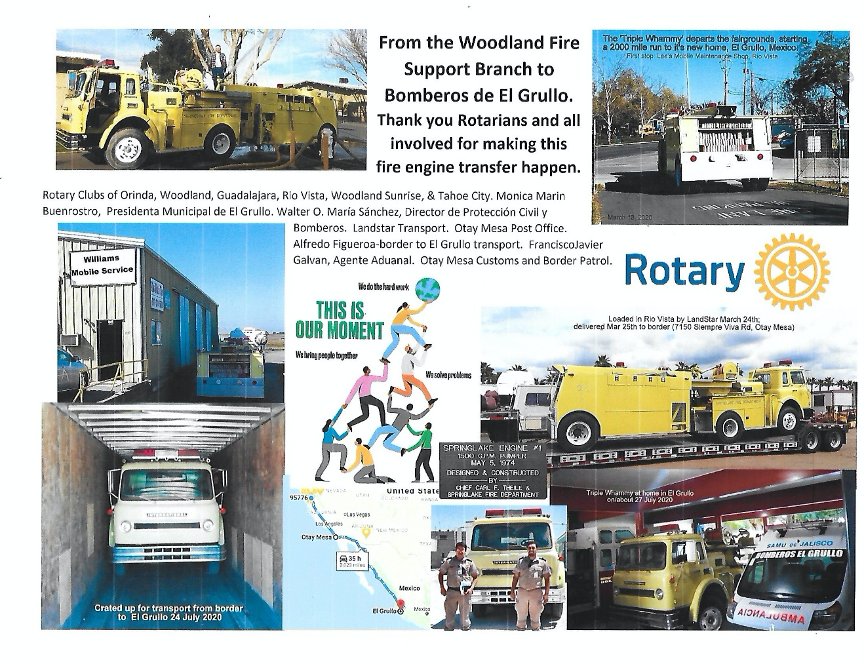